The evolution of Baywood Interiors was really quite simple. In the fall of 1994 Don Brown had reached a point in his career that required a change. His wife, Gail was also at a crossroads having recently left the corporate world and was looking for a new venture. So they did what others do when faced with such a dilemma, they took a holiday to Donʼs homeland of Bermuda!

During long walks on the beaches of Bermuda they did much soul searching and came to the realization that they were happiest when running their own business; as they had done in the past.

While sitting on a piece of driftwood at Grape Bay they made the decision to return home, establish a millwork business and call it Baywood Interiors. Bay, from Grape Bay and Wood from the cedar log they were sitting on at the time.

A straightforward approach to a life-changing and challenging move to make the next part of their working life more enjoyable. Not less work, but more personal satisfaction. By November 1994 Don had secured premises in the Huron Industrial Park and set about buying tools and equipment, establishing vendors and making leasehold improvements to the new location.

Simultaneously first projects were in production to establish the new company and bring in necessary revenue. Like all fledgling ventures this meant extremely long hours and would not have been accomplished without the effort of Baywoodʼs first employee, a long time friend and colleague of Donʼs who was not afraid of hard work or commitment. Gail, meanwhile set to organizing the administrative side of things by establishing a home office, researching banking, government and legal requirements and setting up an accounting system.

Having spent a lifetime in the woodworking trade, Don had many contacts within the trade and customers willing to follow him to the newly formed sole proprietorship. One such customer was a leading national franchise company for whom Baywood Interiors carried out work on some 200 or more of their stores. Business grew steadily within the first year and by the end of the second fiscal year the company was incorporated and the name changed to Baywood Interiors Ltd.

During the next 5 years as the customer base expanded, additional working space was required. Three nearby units were rented increased the working space to three times the original. More employees were hired and the administrative office was moved on site. In 2001 Baywood moved to brand new and larger premises at 830 Trillium Drive, still within Huron Industrial Park.

In 2007 Don and Gail wishing to retire and travel made the decision to sell the company to the sole current owner, John D. Lassel. “Letting go of something you have created from nothing is never easy” says Don.

However, neither he nor Gail have any regrets about starting or selling Baywood. “Seeing it continue in operation supporting consumers, the local economy and providing employment still gives us pleasure.”

Since 2007, embarking on a new diversification plan, Baywood continued to grow, requiring more manufacturing space. In the fall of 2009, Baywood set up a second plant location at 102 Breithaupt Steet in downtown Kitchener, and, in the spring of 2012, a third plant location was set up at 65 Trillium Park Place, in Kitchener, ON.

In the spring of 2014, wanting to streamline manufacturing, gain efficiencies, and acquire in-house finishing capabilities, Baywood decided to amalgamate all three plants under one roof, and embarked on a 7 month journey to find new premises, that would also allow for future growth.

In November of 2014, Baywood moved into it’s new 20,000 square ft. facility, at 55 Hollinger Crescent, in the Bridgeport Business Park, of Kitchener,ON. With the latest in CNC manufacturing technology, a dedicated in house finishing room, and a loyal and eager staff of 40 employees, Baywood looks forward to the future of serving existing and new clientele better then ever before!!

In July of 2018, Baywood leased more raw goods storage space in an adjoining property, at 65 Hollinger Crescent, in the Bridgeport Business Park, of Kitchener, ON.

With the addition of 2 new machines in the last year, and the consequent use of more shop floor space, Baywood was starting to feel cramped and was spending too much time accessing materials around the plant. This expansion allowed more efficient use of our existing plant floor space and employees valuable time.

Founded by the late George Lassel (1929-2005), Lassel Industries Ltd.,was a pre-eminent Architectural Millwork manufacturer in Kitchener, ON, until it was sold in August.1994.

George Lassel (above 2nd from the left) was born in Weilau, Siebenburgen, Romania, October,17.1929. George left Germany and entered Canada in 1949. Once settled in Canada, he met his life partner Irma through the church’s youth group, and embarked on a lifelong journey of raising a family of four children Betty, Ralph, John, and Audrey.

George spent all of his adult life in the woodworking industry. After working for over 20 years for James Gillies and Sons in Preston (Cambridge), ON, and reaching the position of Millwork Superintendent, the sudden death of the president of Gillies, left George and Irma in a life changing position. Never one to spend any time idling, George and Irma quickly decided to continue doing what he knew best, and, founded Lassel Industries Ltd. in 1972.

While sons Ralph and John both worked for their father at one time or another, John Lassel pursued the trade in earnest, gaining both his apprenticeship trade papers in industrial woodworking, and his construction engineering diploma.

George (below on the left) was an active member of the Christian Fellowship Church, Waterloo, ON, and was the spiritual influence in his families lives. 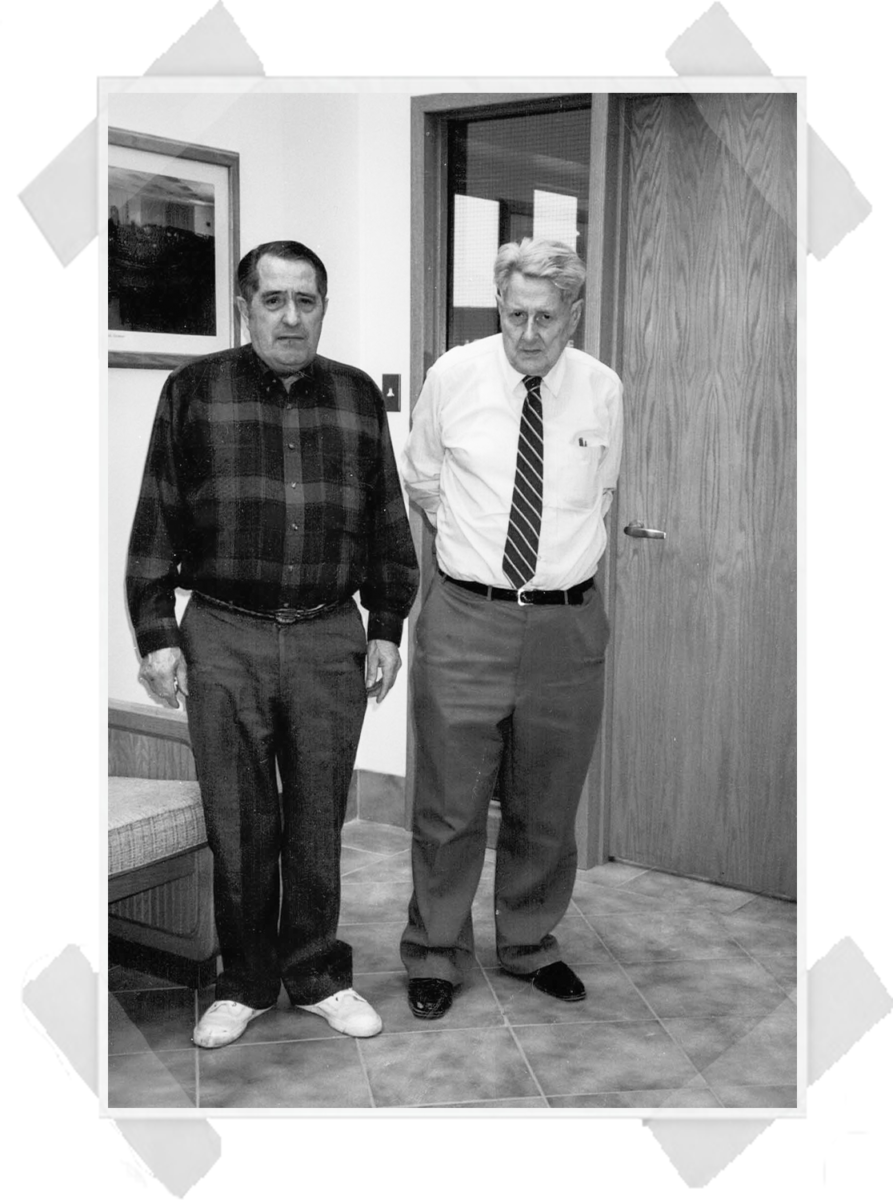